In 1984, I decided that I would never eat at McDonald’s again. I wanted a Big Mac with only cheese, ketchup, and mustard, and they refused to make it. And so started my personal boycott list. Nobody cares about this list but me, but it’s a matter principle and it exists for my own satisfaction. It’s not a list that’s written down and there aren’t very many companies on it. But with few exceptions, it’s a list I stick to.

So today, the wife and I were trying to decide what fast food we might get for lunch. Normally we would choose from Burger King, Arby’s, Gold Star, White Castles, Frisch’s and a few others – but never McDonald’s. Never.

While discussing who has the least offensive fries, we agreed that McDonald’s always had some of the better fries in the world of fast food. Then I mentioned how much I used to love their strawberry shakes … long story short … we decided to get McDonald’s. I threw my arms up in celebration and declared them to be officially removed from my boycott list. “I’m sure they’ll breathe a sigh of relief.” my wife snickered.

Here’s how it turned out. Please study the following picture… 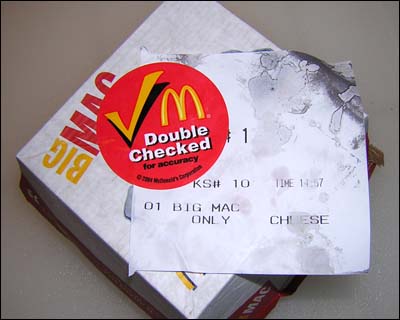 1) I ordered a Big Mac with cheese only, and

2) the order is double-checked by them for accuracy. I assume the sticker isn’t placed on the box until after it’s inspected again. Very impressive!

Here’s what was actually in the box… 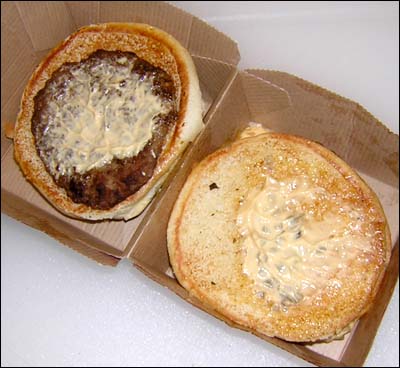 The cheese is there, but so is what I believe to be “special sauce” with scary looking green crap in it. Foul stuff. It was on both layers, so there was no saving the sandwich. And to top it off, they forgot to include the order of fries! So much for double-checking.

And for good measure, here’s a photo of how small the McDonald’s meat patty has become… 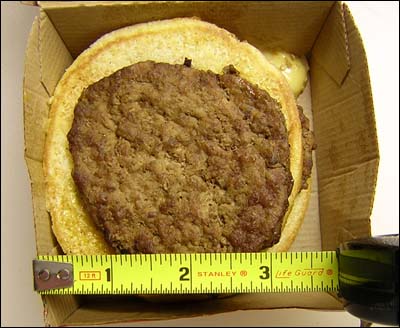 So less than an hour after lifting their 21-year boycott, McDonald’s found their way right back onto my list. “Ba da ba ba bahhh… I’m hatin’ it.”